The MCD Elektronik GmbH is awarded for being one of the TOP 100 innovative leaders in the german medium-sized sector for the fifth time in succession by the compamedia GmbH.

Job offers, company culture and career options - experts, students and trainees will find information for a future at MCD Elektronik in the career section of the website. 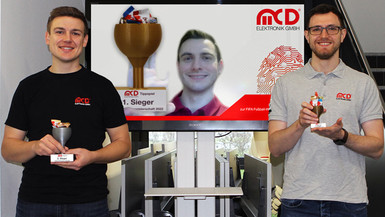 Shortly after Lionel Messi lifted the trophy last sunday at Lusail, the winners of MCDs FIFA World Cup 2022 betting game were honored. MCDs dual student Dennis Rayker won the first place by three points after a suspenseful final. Project manager Stephan Söhnle predicted the World Cup winner Argentina and finalist France at the beginning of the betting game, so these extra points moved him to second place. Software engineer Marcel Bräuninger showed personified stability and defends the third place since the second game day. MCD Elektronik gratulates and hopes that the 3D printed trophys will get a nice place at the winners desks.

MCDs Artificial Intelligence also takes (unrivalled) part at the betting game and confidently was in front until the World Cup quarter-finals. Teached data of former World Cups, odds and qualification games were automated analyzed and tips were generated. There were 37 games that were forecasted correctly, with correct goal diffference or result tendency. Without the late scored goal from France, the number of overall scored goals would have been predicted exactly, too. Thus, MCDs AI confirmed universal fields of application once again. 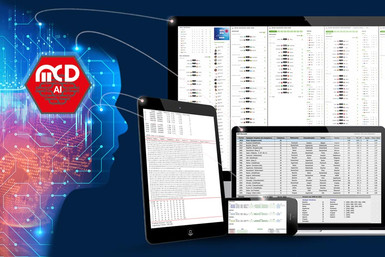 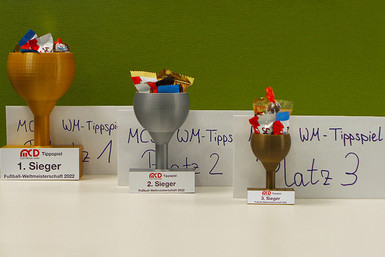